Feedback from the February 1st Hive Power Up Day, by @hivebuzz The Hive Power Up Day has truly become an important moment in the life of our community and, once again, this edition did not disappoint us with new records in participation.

A few words from the PUD organizers

January flew by and it seemed like Hive Power Up Day showed up way sooner than it should! I heard/saw so many people saying, "oh wow, is it that time already?" that I braced myself for a quiet day with fewer than usual power-ups.

Then I started hearing the chatter about the HBD price soaring and suddenly there were power-ups as far as my eyes could see!

Seriously, the timing of the bullish HBD price couldn't have been better - I even far exceeded my own goal for powering up and I know I wasn't alone. I can't wait to see the numbers and find out what ATH (all-time highs) we reached, due in large part to the excitement and enthusiasm of our blockchain community, both here and elsewhere on social media (I know there have been lots of HivePUD tweets today!).

Thanks to everyone for making this yet another wicked awesomesauce Power Up Day, with special thanks to the HiveBuzz team for BEEing such an amazing buzz-maker!

What are the PUD stats of this month?

As already said, we had several all-time highs during this edition. Unheard of since we have supported the PUD initiative.

But let's start first with those who choose to help others grow, the Power Up Helpers .

We have 15 users who have made a power-up to another account and have thus allowed 22 people to get their PUD badge.

A huge thank you to them all for their generosity! Show them some love by upvoting one of their recent posts.

We now have 80 users who helped at least one less powerful user who never got any power-up from anyone. These benefactors got the so coveted Power Up Helper badge: Remember that the number of people you are helping will have a significant influence on the delegations we will do.

But before writing about that, take a look at how you did against the previous editions: New record for the number of participants with 406 users who powered-up their HIVE. It's an 11.23% increase from the previous month!

New record for the volume of HIVE which was powered-up too. No less than 226564 HIVEs have been staked. It's an amazing 8.38% increase from the previous month's record!

Let's now look at what happened with the distribution of power-ups: In nearly all levels, you did better than the previous month, with new records for level 2, 4 and 5 and 44 big stakers who got the Jumbo-Bee thanks to a power-up of at least 1000 HIVE!

Since the beginning of the year, we are rewarding regular participants and those who have also been generous in helping others by offering a 3 weeks Hive Power delegations . To be eligible for a delegation: - you must have participated in this Power Up Day. - You must have performed at least 5 power-ups on Power Up Day. Power-up received from another user is not taken into account. - 4 of these 5 power-ups must have been done on the last 5 Power Up Days (including this one).

The last rule has been slightly modified from what we announced in order not to penalize those who unfortunately missed a PUD (shit happens). This allows us to support a bit more participants and reward your commitment and consistency.

To compute the amount of HP delegated to each user, we use the following criteria:

This month we will delegate no less than 3244 HP to 92 users . That's a 51% increase in the amount of HP delegated compared to the previous month.

Congratulations to all of you!

See you on March 1st for the next PUD!

Reply to "Feedback from the February 1st Hive Power Up Day"
by, @hivebuzz

Fantastic to see the growth and thank you for the delegation!

Totally unexpected but thank you. I still have that super-bee in mind, and who knows one day I may get it.

As usual a great edition full of fun 😋 Thanks again 😉

Close to 10% increase comparing to the previous month! A great success of all of us!

So, did I miss the event? I did the power up, made post, etc, but not sure if I was eligible for the badge or some prize... I don't see my name anywhere... Pls advise ^_^

first, thx for the Delegation!! I have a question, how do you count the helper votes? because you wrote @reiseamateur ( 4 ) 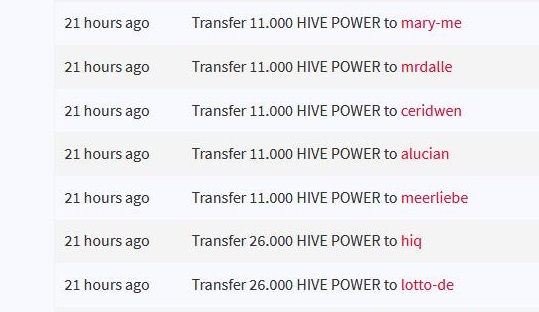 The same i saw last time too. That is why I ask how this is counted.

Cheers, maybe I'll be back next PUD!

Thank you very much for the delegation, I had no idea about this. I don't want to sound ungrateful, I'm really happy and honored but I feel like someone else could use my delegation better, a new user who has less or no stake at all and struggling to start on the chain. It could be a huge help for them.

I'd like to pass my delegation on to someone you think deserves to be helped.

Nice, I received my delegation.

Glad to be on that helper club! And thanks for the delegation, didn't knew it was a thing. Could I make a suggestion? How about instead of delegating to the helpers, delegate to the helpees in the future? I'm sure we all appreciate the delegations, but feel they would be more useful to the ones being helped, most of the time. Cheers!

Wow! Great numbers this month! That is really exciting. Thanks for the generous delegation. It will add to my VP and will be put to good use. ♥️ Thanks for all you do @hivebuzz and @traciyork

it was a nice surprise, and a fun. thank you!

Thanks @hivebuzz for the delegation, Congratulations to all winners!

Hello @hivebuzz What a nice surprise to receive a delegation. I enjoy participating in the Hive PUD and trying to help others do the same.

Well done, big thanks to @traciyork and @hivebuzz alongside helpers and supporters.

Congratulations and thank you. See you next month.

Great to see more people joining in. I know some HIVE is flowing up, but locking it up can help counter that. We need more HP being used to vote.

Thanks power up buddies 😊

Thank you so much for the delegation. 😁

Thanks for delegation... i appreciate it

I just power up every day does that count :D

Absolutely fantastic numbers. This is great for the block chain. More staking = more rewards for all. Well done everyone who participated.

I might hold off my power ups for the end of the month. I powered up 3000 in total across the whole period.

thank you hive team opens the doors to many content creators

I'm kind of new to this...tradition. I noticed the ATH of HBDs and took the advantage of Power up leverage. Then I got a Badge for it. Cool!

@traciyork , @hivebuzz has just told me that my HP has dropped so that I am no longer a Dolphin, but am now back to minnow status. I do NOT understand this. My HP is higher now than it was Monday on HPUD day, because I've claimed rewards since then, just a trickle but still, my HIVE POWER HAS NOT DROPPED, IT HAS INCREASED.

Being jerked around like this is NOT conducive to my being more willing to try and onboard folks, nor to participate in HPUD any longer.

Wow, that's so cool to see the growth of a lot of accounts and more folks getting involved! Well done to you folks and @traciyork for keeping the good juju going!

Life got the better of me in January and I missed out this month's power up day unfortunately, still a little broken but hopefully can pick up the pieces a little more leading in to March.

Stake it easy everyone 😃

Thanks a lot. I had no idea you make delegation based on PUD... I'll find some newcomers to help with this amount of HP.